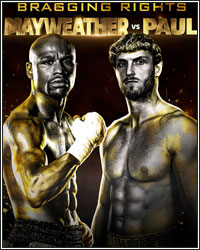 How about this– Logan Paul vs. my bulging, bulbous sack in an exhibition pay-per-view for the super regular WBA inter-platform play-pretend catchweight championship? Or how about I just spray some gooey, salty truth all over last Sunday’s Floyd Mayweather-Logan Paul exhibition and boxing’s crotchety old purists?

Paul, did you fork over $50 for that Mayweather fight? Lol…

There’s not one retired professional in any profession that wouldn’t do an exhibition for a huge payday. Did we forget that a prime Muhammad Ali fought Antonio Inoki (One of the most strange combat events of all-time). After Oscar De La Hoya retired he fought Shaq in an exhibition match. Where were the critics then?  Do you see any difference between Mayweather v. Paul and De La Hoya v. Shaq?  I wasn’t around back when Ali fought Inoki, but I’ve seen footage and it made me cringe watching Ali get his legs chopped at like that. What was the sentiment within the boxing world back in 1976 when Ali took that fight?

No, I didn’t shell out the 50 bucks for Mayweather-Paul. But as I wrote previously, I don’t pay for anything and haven’t paid for any boxing pay-per-view since, I think, De La Hoya-Trinidad. My situation, though, is a bit different than most fight fans’.

I don’t think we have to go all that far into the past to find the butt-crack of a double standard. I saw very little hand wringing over the Tyson-Jones exhibition and nobody was saying that Julio Cesar Chavez and Jorge Arce were destroying their legacies (and the sport) when they fought their exhibitions.

I wasn’t old enough at the time to notice the buzz about Ali-Inoki, but I do recall a weepy-eyed, loving remembrance or two from a couple of well-known boxing writers about the once-upon-a-time proposed Ali-Wilt Chamberlain exhibition. Not surprisingly, the outrage over these fluff events is selective.

I’ve also noticed that, for the most part, those crying the loudest about the “purity” of the sport are those who’ve never fought, never trained seriously, never actually worked in the boxing business. Because the pros know how hard it is to earn a buck and keep a buck in boxing and, as you said, they would never turn down a good payday for an easy (and fun) night’s work.

The Dinosaurs vs New Age

First, P Mag, hope you and the family are doing well. Second, I caught your article about how Floyd/Paul wasn’t hurting boxing and I couldn’t agree more. It seems like the dinosaurs (promoters/managers/advisors) refuse to come over to the new age. Its like they are still trying to figure out how to install an 8-track player in a 2021 Ford F-150 lol.

It’s amazing how Triller was able to take the old school (Tyson vs. Jones) and mix it with new school material. Sure, Triller didn’t exactly hit the bullseye with what they put on, but they threw a bunch of things out there to see what would stick. I’m pretty sure they will remove the excess junk and keep what is solid. Floyd did this as well with Paul. He mixed old school (himself) with Paul (someone who people relate to) and made an event. It’s sad that the “real boxing world” doesn’t think outside the box as far as promotion goes. Just imagine how many sales could be generated through ppv if the powers that be thought outside the box.

Thanks for the well wishes. I hope all is well with you and yours also.

It never ceases to amaze me just how resistant to change boxing and much of its fandom is. Even when faced with a clearly diminishing fan base (at least in the US), the bossmen will opt to wring more dollars and cents from the increasingly beleaguered and frustrated base rather than do anything at all to grow the base and invest in the sport’s future.

Well, here’s a wake up call for the “purists” and those clutching their pearls and tinkling their panties in self-righteous indignation– some of the “big” fights can’t get made precisely because boxing has failed so miserably in building and replenishing its base. The fan base has dwindled so much that pretty much all that’s left are the hardcore fans who watch everything, anyway, and, because of that, there’s really not much more money in Spence-Crawford, for instance, than either guy fighting a lesser challenge. Outreach is essential…growing the base is essential…Boxing shouldn’t be your personal male fairy tale clubhouse, shut off from the rest of the world.

This elitist attitude from the fans and media about “newcomers, casuals, kids, the uninitiated” being brought into the mix– not just for this Mayweather exhibition, but ALL the damn time– has to stop. I was in the US for Mayweather-Paul. My 17-year-old godson made sure to show up for the card and he brought a bunch of his friends. The living room was packed with teens. They saw that hellacious Hurd-Arias fight on the undercard and were stuck on the screen for that one. For at least one night, boxing was in their lives when it normally wouldn’t be…that’s not a bad thing. I say that it’s better for the sport if we reach out to the fresh faces and try to bring them to the real game, rather than just call them idiots and assholes. It’s not like they’re seeing all that many high-end fights on free TV these days to hook them into fandom, so these celebrity events may be their only entry to the real sport.

As for the “right” balance of substance and fluff, that’s a trial and error thing.

What we do know, however, is that a farmer can’t keep harvesting and harvesting. He also has to plant crops and tend to the field if he wants long-term sustainability. Social media and YouTube provide the perfect chance for expansion. Put a real barn-burner on FREE, across several platforms. I’d even go so far as to say, make it a 2-fight card with one of these YouTuber fights up front and the “real” fight afterwards. Hype the shit out of the real fight during and before the YouTuber scrap, burn the internet with sizzle. Even if just a third of the audience stays tuned after the YouTuber stuff, we’re talking about potentially millions of eyeballs exposed to elite-level, top-of-its-game boxing. I’m sure it wouldn’t be a complete money loss, since sponsorship and ad money would be good, but you have to take a loss to some extent to build the base. It’ll be short-term loss for long-term gain.

I say “true” fans of boxing should be more concerned about growing the sport and keeping it healthy with sustainability than chasing “outsiders” away.

Got a question (or hate mail) for Magno’s Bulging Mail Sack? The best of the best gets included in the weekly mailbag segment right here at FightHype. Send your stuff here: paulmagno@theboxingtribune.com.